DeMolay is the largest youth fraternity in the world. The Order of DeMolay was started over 80 years ago in Kansas City, Missouri. DeMolay is a character building organization for young men who are 12 to 21 years of age.

Brief History of the DeMolay:

Freemasonry draws upon its antiquity for its rituals and has its own requirements for membership. DeMolay is different and there is no requirement that its members must be involved in Freemasonry in any way nor must anyone in their family be a Mason in order for them to join. The first DeMolay was Louis Gordon, an orphan. DeMolay was founded  1919 and, while the first DeMolays had the support of  Frank Land, a Freemason, Dad Land explicitly stated that he did not want their group to be influenced overly by his Masonic background. In fact, he refused to provide criticism or direct their decisions while they were creating their club’s identity.

Perhaps the greatest influence he had during the initial founding of DeMolay was pointing out some historic events (such as the round table and King Arthur, and biblical stories like Damon and Phythias, David and Jonathan and of Nathan Hale) that might be used to exemplify their group and give them something to strive towards. As the boys respected Frank Land (who later became the first Chapter Dad of DeMolay), they were naturally curious to know about the organizations that someone they looked up to was affiliated with. This led Dad Land to talk about Jacques DeMolay, the last grandmaster of the Order of the Templar. It was, however, the first DeMolays themselves, not Dad Land, that ultimately chose, among those historic events, the one about Jacques DeMolay because they saw it as a tale of heroism, loyalty,  courage, and chivalry. These were ideals that the boys felt were worth striving for.

DeMolay was founded by those boys and it later grew to become an international organization that has been helping young boys grow into young men for almost a century that, through their DeMolay activities, have greater confidence, leadership skills, a sense of filial respect to one’s family, loyalty to their friends, and honor to their country. Like the original group of friends that founded DeMolay, to this day, it is not the adults that run the chapters, make decisions, and decide what activities to participate in like other youth organizations. The boys themselves run their chapters while the adults affiliated with it provide guidance and support. When they come of age, they become Senior DeMolays and, while some do go on to join Freemasonry, and some may be encouraged to do so by Masons they have come to know while in DeMolay, there is no official encouragement by any lodge or Masonic organization to do so and many do not become Freemasons.

While DeMolay may have had the support and encouragement from Dad Land, a Mason, it was not founded on Masonic principles although there are similarities. Their name, for instance, came from a story told by a Mason. DeMolays must believe in a higher power, and they generally encourage the same moral principles as Freemasons, such as morality, friendship, honor, and brotherhood. This is where much of the similarities end as many of the guiding principles of DeMolay were created based on the events of the final days of Jacques DeMolay and family given that Louis Gordon, an orphan, came into contact with Dad Land in order to find a job to support his family after the passing of his father. If that boy had not had a strong desire to take care of his family despite being only a child himself, DeMolay would likely never have existed. 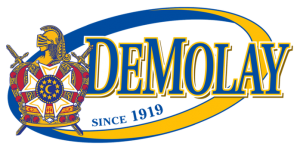 On the flip side, had it not been for Freemasonry’s history of strong support for orphans throughout the ages (something that should help find solidarity with foster parents), and that Dad Land was an exemplary Mason in that aspect, the original founders of DeMolay might not have gained the support they needed to found DeMolay for, while Dad Land did not influence their decisions (except for one, immaterial to this discussion, on how they should not restrict membership to only the initial founders and members who joined directly afterwards), he was the original person that suggested that Louis Gordon form a club of likeminded boys, and, as he was a Mason (and a member of the Scottish Rite), he helped their club get acceptance to meet at the local Scottish Rite Temple along with other various physical support and moral guidance, just as Masons continue to provide to this day.

Had it not been for his support, DeMolay might never have existed instead of becoming an international organization that can claim Walt Disney, Neil Armstrong, Dan Rather, John Wayne, Paul Harvey, Walter Cronkite, Alice Cooper, John Steinback, WWE’s the Undertaker (now there’s a shocker!), Mel Blanc (think bugs bunny), Ernest Borgnine, Colonel Frank Borman, General John McConnell, and President Bill Clinton, among many others.

South Seminole Lodge No. 364 of Freemasonry

Proudly Serving The Communities of: Casselberry and all of South Seminole County, Florida

© 2021 — South Seminole Lodge - All Rights Reserved - This is the official Web site of South Seminole Lodge No. 364 of Free and Accepted Masons in Casselberry Florida.  The information on this Web site is provided as a public service only and should not be used for commercial purposes.  Unless otherwise explicitly stated, the material on this website is provided "as is" and without warranty of any kind.  All express or implied conditions, representations and warranties, including any implied warranty of merchantability, fitness for a particular purpose, or non-infringement, are disclaimed.  While it is our goal to keep this website accurate and current, no representations, warrantees, guaranties as to the quality, suitability, accuracy, or completeness of any of the materials contained on this website are made.  Please enjoy your visit to our website.  If you have any comments to help us improve this website, feel free to contact us by clicking on the e-mail link on the lower right of the page.