Hope Assembly Rainbow Girls is part of the International Order of the Rainbow for Girls (IORG) is a Masonic youth service organization which teaches leadership training through community service. Girls (ages 11–20/21) learn about the value of charity and service through their work and involvement with their annual local and Grand (state or country) service projects. In addition, the Bow has a group for younger girls (ages 5–10) called a Pledge Group. This group teaches younger girls about Rainbow. 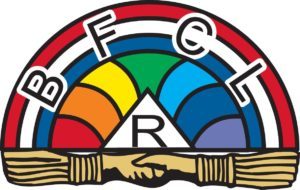 Brief History of the International Order of the Rainbow for Girls:

The order came into existence in 1922, when the Reverend W. Mark Sexson, a Freemason, was asked to make an address before South McAlester Chapter #149, Order of the Eastern Star, in McAlester, Oklahoma. As the Order of DeMolay had come under his close study during his Masonic activities, he suggested that a similar order for girls would be beneficial. The first Initiation consisted of a class of 171 girls on April 6, 1922, in the auditorium of the Scottish Rite Temple in McAlester. The original name was “Order of the Rainbow for Girls”.

Girls can hold many different offices (also called Stations) in the local Assembly. Each requires some memory work and all but two serve for one term (six months out of the year). Some offices are elected by the other girls in the assembly. These offices include Faith, Hope, Charity, Worthy Associate Advisor, and Worthy Advisor. There are also two offices that are elected in January but serve a full year which are Treasurer and Recorder. The other offices are appointed by the Worthy Advisor (President) and Mother Advisor.
The Mother Advisor is the primary adult working with the girls. An Advisory Board of seven to fifteen adults consisting of at least two Master Masons and two members of the Order of the Eastern Star, members of the sponsoring body(ies), and Majority Members, aid in the supervision of the Assembly. Almost all of the Assembly work is done by the girls, with the advisors in support roles only.
The appointing of Grand Officers varies from jurisdiction to jurisdiction. Generally, to be appointed or elected to a Grand Floor Office, a girl must be a Past or Present Worthy Advisor in her assembly. Grand Representatives may also be PWAs, but it is not mandatory.

The governing body of Rainbow is the House of Gold. New members are elected by current members. The House of Gold consists of the Supreme Officers (paralleling a local Assembly), Supreme Inspectors (chief advisor for a jurisdiction), and several others making up a total of 50.

The International Order of the Rainbow for Girls has Assemblies in 46 states in the United States as well as in several other countries. The states that do not currently have Assemblies are Delaware, Minnesota, Utah, and Wyoming.

The countries outside the United States that have assemblies are Aruba, Australia (in Queensland, New South Wales and South Australia), Bolivia, Brazil (in Parana, São Paulo, Distrito Federal, Minas Gerais, Mato Grosso do Sul, Tocantins, Pará, Espírito Santo, Santa Catarina (Biguaçu)), Canada (in Ontario and New Brunswick), the Philippines, Italy, Mexico, and Romania. Rainbow has had assemblies in the following countries, mostly due to American military presence: Cuba, Germany, France, Panama and Vietnam.
Its headquarters are at the International Temple in McAlester, Oklahoma built in 1950-1951 for the Order’s use.

Being related to a Master Mason is not a requirement for Rainbow membership. Interested girls must submit an application to an Assembly and members of that Assembly will meet with the girl to answer any questions the girl may have and to make sure she is a proper candidate to receive the degrees. Once the application is accepted, the assembly will vote on accepting the candidate into the Assembly. Membership then starts with an Initiation Ceremony.

Members are expected to serve their community, be law-abiding, acknowledge the authority of the Grand Assembly, and show loyalty to the other members, among other things. In 2000, the rules for Eastern Star were changed so that majority members of Rainbow were eligible for membership in that Order. For girls between ages 8 and 10, some jurisdictions have a “Pledge” program for prospective members, so that they can become familiar with Rainbow ceremonies and activities.

Majority Membership is reached in two ways. A girl receives age majority when she reaches her 20th birthday, or marriage majority if she marries before age 20. Also, depending on the jurisdiction, girls are given the choice of extending their membership until they reach the age of 21. For this to be granted, the girl must write a letter expressing her interest in extending her active service and present it to her Supreme Deputy/Inspector.

I am proud to be a Rainbow Girl. This group instilled in me the values of service, honesty, and leadership, among others. I have carried these ideals with me throughout the years. Being a member of the International Order of Rainbow for Girls reflects well on a young women’s character and integrity and will benefit today’s Rainbow Girls throughout their lifetime.

If you have further question about the International Order of the Rainbow for Girls or regarding membership into the Hope Assembly No. 82 chapter, please feel free to reach out to us.  We will be more than happy to answer your questions and/or point you in the right direction. Thanks from the Hope Assembly Rainbow Girls!

South Seminole Lodge No. 364 of Freemasonry

Proudly Serving The Communities of: Casselberry and all of South Seminole County, Florida

© 2021 — South Seminole Lodge - All Rights Reserved - This is the official Web site of South Seminole Lodge No. 364 of Free and Accepted Masons in Casselberry Florida.  The information on this Web site is provided as a public service only and should not be used for commercial purposes.  Unless otherwise explicitly stated, the material on this website is provided "as is" and without warranty of any kind.  All express or implied conditions, representations and warranties, including any implied warranty of merchantability, fitness for a particular purpose, or non-infringement, are disclaimed.  While it is our goal to keep this website accurate and current, no representations, warrantees, guaranties as to the quality, suitability, accuracy, or completeness of any of the materials contained on this website are made.  Please enjoy your visit to our website.  If you have any comments to help us improve this website, feel free to contact us by clicking on the e-mail link on the lower right of the page.